In each year between 2015 and 2019 the Upper Onny Wildlife Group has been awarded a grant by the Shropshire Hills AONB to survey the Rivers East and West Onny for two species of invasive exotic plants: Himalayan Balsam and Japanese Knotweed and then to implement measures to control these plants. This funding has been supplemented by the Severn Rivers Trust to fund the project in 2019 and 2020.

Rob Rowe completes the annual survey. Himalayan Balsam, which was initially far more abundant than anticipated on the R. West Onny, is now far less prevalent. However, isolated Himalayan Balsam plants continue to be found and must be removed (by pulling up by the roots) if the work of previous years is not to be in vain. Although the entire length of the West Onny must be searched the process is becoming quicker, enabling the volunteers to extend the length of river cleared each year.

Fortunately the River East Onny is much less affected, but the plant was found along the Criftin Brook which is a tributary of the R. Onny just after the confluence of the East and West Onny.  A report of the 2015 and 2016 surveys and Himalayan Balsam control measures can be found on the Project Results page.

Japanese Knotweed is a more difficult proposition and specialist techniques involving herbicide are needed. No Japanese Knotweed was found on the Rivers Onny, but a few patches have been reported away from the rivers. Trained personnel from Natural England will implement the necessary control measures.

If you see either species, especially near the Rivers East and West Onny (or any of their tributaries), please e-mail UOWG@shropscwgs.org.uk giving precise details of the location and the landowner if you know the name and address.

Please see the poster below for an image of each plant and more information about the project. 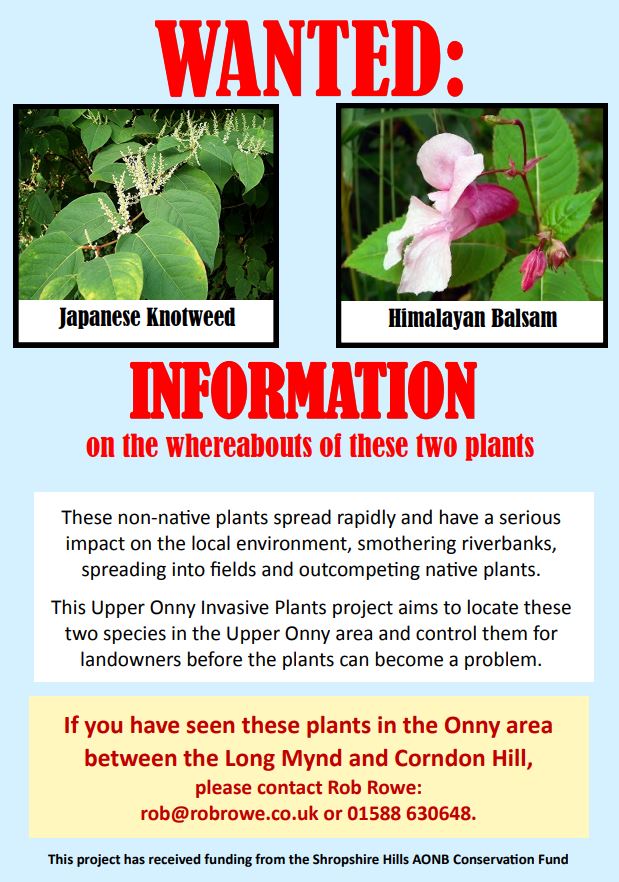 The Upper Onny Community Wildlife Group received financial support from the Stiperstones & Corndon Hill Country Landscape Partnership Scheme, which is funded by the Heritage Lottery Fund. The lead organisation for the Scheme is the Shropshire Hills Area of Outstanding Natural Beauty (AONB) Partnership, and the Scheme is hosted by Shropshire Council. Please see www.stiperstonesandcorndon.co.uk